Sleep was brief, around four hours, but surprisingly restorative. I didn’t have the ‘spoons’ for this morning’s planned soak in the bath but was able to shower thanks to my bath board. It’s a disability aid that I was reluctant to take possession of last year but which is actually worth its weight in gold.

I spent some time menu planning – breakfasts, lunches and dinners – yesterday evening. Having a plan is beneficial on many levels not least in beginning to tackle my eating disorder, promoting self care and maximising my tight budget. Variety, satisfaction and healthy options are key to the former. As I said here, when ‘spoons’ run low cooking so often falls off my to do list. I’m making it a priority as one of my first steps out of this current crisis. Some old favourites will feature on the plan together with some new recipes. Here’s a selection:

Yes, I did buy a large box of ‘Basics’ mushrooms and large bag of ‘Basics’ courgettes and have been hunting ‘spoonie’ friendly courgette recipes!

Today’s breakfast was an old favourite from the Hairy Dieters – crumpets with warmed berries, fat free Greek yoghurt and a drizzle of honey.

Lunch was herby mushrooms and tomatoes on toast, followed by a banana.

In case you hadn’t noticed, I don’t eat meat. Dinner was a bowl of the Chilli Non Carne that I made this evening. My recipe varies according to budget and what I’ve got in. This version used the following:

I bought several packs of the soya mince while it was on offer and much cheaper than Quorn  or generic chilled varieties. You reconstitute it with boiling water then treat as normal. It does not look appetitising when first made up but tastes good in the finished product! 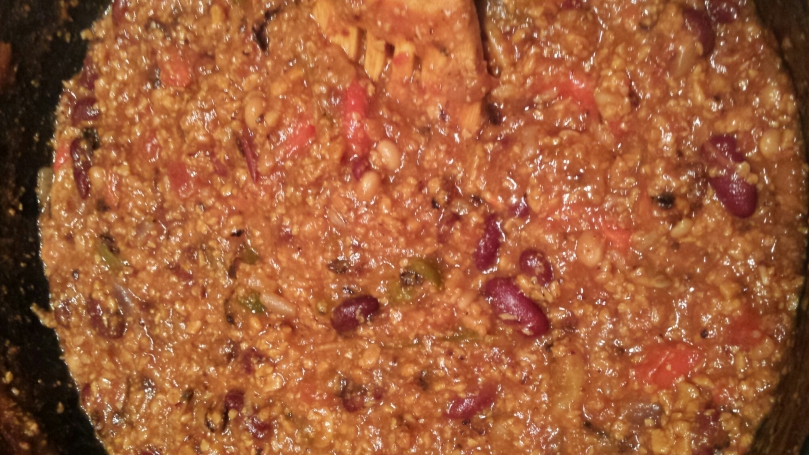 I’m really shattered and virtually out of ‘spoons’. Emptying the dishwasher of last night’s load and putting in today’s dishes has to wait until tomorrow. The chilli prep and cooking takes a fair amount of ‘spoons’, and by the time I finish I’m very sore, luckily it will make a few meals. My Fibromyalgia had already rendered me very stiff today, so when I stand up I can’t straighten up at first and have to painfully unfurl pace by slow pace. In these moments I laugh at my predicament to help me to deal with it.

I’ve just enjoyed watching MasterChef. I do admire the cooking adventures of the participants. I smiled tonight at the appearance of ‘whey-glazed carrots’ … they’re waaaay beyond my culinary ambition! But seriously, if posting photos of your daily meals and basic cooking efforts seems dull or even narcissistic, I can say only that it’s integral to my thrust for recovery. I can’t remember the last time I ate three good meals in a day, let alone made three virtually from scratch. Posting in this way, in celebration of my efforts, is motivating and a useful record of my progress. Perhaps, somewhere along the line, my posts might help someone else too.

9:50pm I’ve been pyjama’d and under the covers since a little after 8 but I’m determined to complete and publish this post tonight. I’ve had to rewrite half of it after WordPress gobbled it and refused to give it back. I suspect I’ll sleep tonight, but it might be an idea to take painkillers to try to limit the risk of #painsomnia.

I was able to meet with my advocate this afternoon for the first time in over two months. This is a huge deal. I’ve made many attempts to meet with her since mid February but overwhelming trauma symptoms forced me to cancel each time. She visited me at home together with one of her colleagues, both were so lovely. I had written notes ahead of their arrival. We had a productive meeting  It felt safe, and to feel any sense of safety at all, after the devastating events of last year, is progress. I’ve yet to regain real hope for the future – something I thought couldn’t be shattered, after all I’ve survived so much, but last year’s events broke me – however, I’m focusing on an idea that was once very helpful to me … You don’t have to see the top of the staircase to take the first step.

My advocate and I have made a plan of initial steps. We’ll speak on Monday and arrange a further meeting.

5 thoughts on “Successes, Safety and a Salient Staircase ”

Search here for specific posts by title or topic: